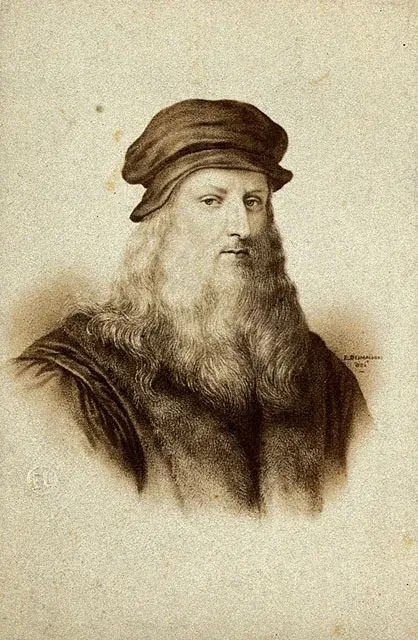 He is a Renaissance artist, painter, sculptor, and architect. He embodied the human renaissance with his art and genius. He was born in Anchiano, Italy, near the town of Vinci. French Klux, which is now known as Clos Lucy, and Leonardo enjoyed great and unique fame, as he was one of the most versatile men of his time, and he left behind many paintings and blogs indicating the extent of his ingenuity and the abundance of his skills, and he made contributions to many In matters especially in anatomy, Leonardo Da Vinci drew most of his knowledge and knowledge from reading.

About the life of Leonardo da Vinci

Da Vinci was born to a father and a mother who are not bound by legal ties, and his father, Ser Piero, was a lawyer and notary, and his mother, Caterina, was a peasant. Da Vinci spent his first lived with his mother, and when he was five years old he moved to live with his father, Da Vinci grew up in the confines of His father, and he received his limited primary education where he learned reading, writing, and arithmetic, and when he became thirty years old he studied mathematics, geometry and arithmetic diligently, as for Leonardo’s tendencies for art, he appeared when he was fifteen years old, and when his father noticed that he showed him to the artist Andrea Del Verrocchio, who received him In his workshop to receive training, Da Vinci actually trained in sculpture and learned mechanical and technical arts, and in 1472 AD, when he was twenty years old, he was accepted to be a member of the Painters Guild in Florence, and in 1481 Da Vinci began to work independently and painted many Technical panels such as pumps and military weapons, and various mechanical devices, which indicates the extent of his interest in technical matters in his life.
In the year 1482 AD, da Vinci moved from Florence to Milan to work in the service of the Duke of the City, and he stayed there for 17 years, and he was included in the record of the royal family as a duke’s painter and engineer, and da Vinci was in that period of great importance that made him appreciated, and he was being consulted In various fields of architecture and military matters, he also worked during that period as a hydraulic and mechanical engineer, and during his stay in Milan he completed six works, including the painting of the Virgin of the Rocks which he painted during the period 1483-1486 AD, and he also painted one of his greatest and most famous paintings, a painting The Last Supper in the period 1495-1498 AD, and the famous Mona Lisa was painted in the period 1503-1519 AD. The period that Da Vinci spent in Florence from 1500 AD to 1508 AD was a period full of intense scientific studies. In the Santa Maria Nova Hospital, Da Vinci expanded in Anatomy to study the structure of the human being and the functions of its organs, as well as the nature of water movement and its physical properties.
Read Also: Exercises That Get Rid of Back Pain, Most Notably Head Rotation
During the period 1508-1513 AD, da Vinci’s scientific activity flourished, as it achieved new success in anatomy in cooperation with the well-known anatomist Marcantonio Della Torre. On visual, mathematical, mechanical, botanical, and geological studies as well, and in 1513 AD Leonardo moved to Rome due to the difficult political conditions that led to the expulsion of the French from Milan, and in 1516 AD, when Leonardo was sixty-five years old, he left Italy forever and headed with his student Melzi went to Clox to spend the last three years of his life in a small house in it near the king’s palace in Amboise, and he died in Clox and was buried in the palace church of Saint Florentine, and this church was destroyed at the beginning of the nineteenth century, and there is no longer any existence of his grave.

Da Vinci contributed to the invention and development of many things at various levels, including:
* Landing parachute: The invention of the parachute or parachute goes back to Sebastian Lenormand, who invented it in 1783 AD, but the idea was originally issued by Da Vinci two hundred years before it was issued by Sebastian, and Da Vinci had designed a triple-shaped parachute instead of Be circular as in modern umbrellas.
* The helicopter: Da Vinci drew illustrations of the structure of a helicopter in the late fifteenth century and was called the Helical Air Screw, and it is worth noting that airplanes these days are very similar to the drawings of old Da Vinci.
* Wind speed measuring device: Da Vinci added several modifications to the thermometer, which made measuring velocity easier. It was Leon Battista who invented the thermometer in 1450 AD.
* Flying craft: The flying craft designed by Da Vinci is one of the most famous in the field of aviation, and his design was called Ornithopter.
* Self-propelled car: Da Vinci designed a car with a test that enables it to move on its own, and was the first to do so, as he designed it before the idea of   a car with a motor came to anyone’s mind.
* Da Vinci Clock: Da Vinci designed the water clock or water alarm by collecting water and then dropping it into another container, and when it is full, the water acts on a set of levers whose function is to raise the sleeper’s feet to wake up.
* Diving equipment: Da Vinci came up with the idea of diving equipment and clothing for that when the Turks approached the invasion of Venice in the late fifteenth century, and this idea was somewhat warlike aimed at assisting in diving and piercing enemy ships, but the withdrawal of the Turks prevented its implementation.
* The armored tank: It is one of the most famous inventions of Leonardo Da Vinci in the war field, and the armored tank contained a group of light cannons arranged on a circular platform that allows it to be 360   degrees, and at the top of this platform a large cover similar to the shell of a turtle with metal plates added to achieve better protection.
* Da Vinci invented a pneumatic timer with a specific weight of lead, which together with the water clock helped him to set the time more accurately.
* Multiple layouts for massive drilling machines and heavy lifting machines.
* He studied the human body in detail, drawing the bones, the skull, and the internal organs of the body.
* He designed machines that polish the lenses, as well as plans for movable bridges that work on water pressure.
* Invented many musical instruments.
He worked on mixing watercolors and drawing shadows, using the third dimension with great skill, and came up with the idea of   the convergence of the lines of the figures in one point; It is the point of infinity that has occupied the minds of scholars over time.