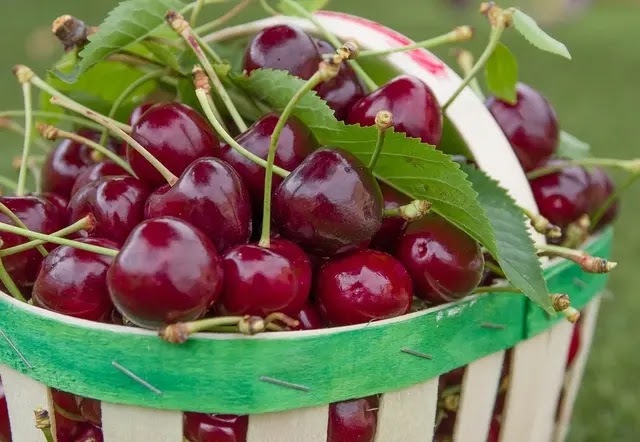 Cherry contains many important compounds and nutrients that give it many health benefits for the human body, including:

* Antioxidants: Sour cherries contain high amounts of antioxidants, the most important of which is anthocyanin, whose amount ranges between 27.8 mg to 80.4 mg per 100 grams of cherries, and a study published in Cancer Letters in 2003 showed that the anthocyanins found in sour cherries, in addition to Cyanidin may help reduce the risk of colon cancer and the risk of cancer cells growing in it.

* Phytochemicals: These compounds protect the body from inflammatory enzymes, which may help relieve arthritis pain.

* Potassium: 1 cup of sour cherries contains 268 mg of potassium. That is equivalent to 8% of the daily amount, while sweet cherries contain 306 mg; Equivalent to 9% of the daily amount of this mineral, and potassium contributes to improving heart health and reducing the death rate due to heart disease, and a study published in the Archives of Internal Medicine in 2011 showed that increased potassium consumption is associated with a reduced risk of death from diseases. Cardiovascular disease, in addition to increased sodium consumption, is associated with a significantly increased risk of cardiovascular disease, as well as increased mortality.

* Dietary fiber: Cherries contain high amounts of dietary fiber, which helps facilitate bowel movement and prevent constipation, and the daily recommended amount of fiber is equivalent to approximately 38 grams for men, and 25 grams for women, and it is worth noting that cherries have a low glycemic index. , Or what is known as the glycemic index, by which foodstuffs are classified according to their effect in raising the blood sugar level.

Tart cherries provide many health benefits to the body, but their effectiveness varies from one benefit to another, and in the following detail:

* Improving athletic performance: Tart cherry juice can increase muscle strength, relieve pain, and aid recovery after exercise. In a study published in the Journal of the International Society of Sports Nutrition in 2016, it showed that consuming cherry powder supplements for a short period during Endurance exercises; reduced the signs of muscle catabolism, and reduced inflammatory and immune stress, in addition to improving athletic performance in people practicing aerobic exercise, and another study published in the same journal in 2015 indicated that participants who consumed tart cherry powder before and after resistance training experienced a greater reduction in Muscle pain, signs of muscle damage, loss of strength during recovery, plus reduced oxidative stress within muscles.

* Relief of respiratory infection: tart cherry juice contains vitamins, minerals, and plant compounds  Which promotes the health of the immune system, and its high antioxidant content may help reduce the risk of infection. A preliminary study published in the Journal of the International Society of Sports Nutrition in 2015 was conducted on a group of marathon runners, and the results showed that the participants Those who consumed red cherries did not have symptoms of respiratory infection, compared to those who did not consume them, as 50% of them had symptoms.

* Reducing insomnia: Tart cherries are one of the natural sources of melatonin. Responsible for regulating the sleep cycle, it also helps, along with anthocyanins, to sleep better at night, and a study published in the European Journal of Nutrition in 2011 showed that sour cherry juice concentrated an effect on improving sleep quality and duration, by increasing the proportion of melatonin.

* Reducing gout: The anthocyanins in sour cherries may help relieve gout, because they have an anti-inflammatory and antioxidant effect, and sour cherries can reduce uric acid levels, or what is known as uric acid in the plasma, and increase its excretion. In the urine, a study published in the Journal of Arthritis in 2012 showed that consuming concentrated cherry juice for 4 months or more could reduce acute gout pain, but more trials are needed to prove the benefit of consuming tart cherries for long periods in reducing The risk of developing gout.

* Reducing fibromyalgia: Recent studies have not proven the effectiveness of tart cherry concentrate in improving and strengthening muscles in women who follow an exercise program, and who suffer from fibromyalgia.

Studies on the benefits of sour cherries

* A study published in the European Journal of Nutrition in 2017, which included a group of elderly people over the age of 70 years, who suffer from mild to moderate dementia, indicated that their consumption of sour cherry juice by 200 ml per day for 12 weeks improved verbal fluency. And the memory in the short and long term, as it may improve their cognitive skills.

* A laboratory study published in the Journal of Medicinal Food in 2009 showed that cherry powder consumption was associated with a reduction in hyperlipidemia, abdominal fat percentage, and fat mass, as well as reduced symptoms of metabolic syndrome, thus reducing the risk of heart disease and type 2 diabetes. In mice suffering from obesity, metabolic syndrome, and given a high-fat diet, it is worth noting that more studies are needed on this effect in humans.

* Reducing the risk of gout: A study published in the journal Nutrition in 2003 showed that women consuming about 280 grams of sweet cherries twice daily, after fasting overnight, reduced the level of uric acid in the plasma, and thus it is possible for sweet cherries to reduce the risk of infection. Gout.

* Reducing the risk of high cholesterol and heart disease: A study published in the journal Nutrition in 2006 was conducted on a group of healthy women and men, and found that their consumption of approximately 280 grams of sweet cherries per day for 28 days did not affect the reduction of cholesterol, triglycerides, and harmful cholesterol. It did not raise the levels of good cholesterol, and on the other hand, it was found that its consumption decreased the levels of CRP in the blood plasma, and thus it may reduce inflammation that may lead to an increased risk of heart disease.

* Other benefits: There are some cases in which there is insufficient evidence for the effectiveness of cherries in mitigating them, such as:

Tips for buying and storing cherries

When buying cherries, it is advisable to follow a set of tips, as you should choose fresh cherries preserved in cool and damp places; Because its taste and texture are affected by the heat, and it is preferable to stay away from small, soft, and damaged grains, and choose large, shiny, plump and hard fruits of dark color, which contain green stems, and when storing it, it is preferable to keep unwashed ones in plastic bags or in a container Wrapped with plastic wrap inside the refrigerator, and it can be stored for a week in the refrigerator and freezer for a year.

Degree of safety and precautions for using cherries

Degree of safety and precautions for cherry

Degree of safety and precautions for sour cherries

An overview of cherries

Cherries are available in several types, such as sweet cherries and sour cherries, and they can be differentiated by color, sweet cherries tend to darken, while sour cherries retain their bright red color after harvesting, and cherries are available in many forms; It is available fresh, which can be used in the manufacture of jams, jellies, and soft drinks, in addition to the possibility of cooking, and it is also available frozen or dried, for use in many cooking recipes and desserts.

Cherries are available in many different colors and shapes, and we mention the following:

* Black cherry (scientific name: Prunus serotina), and this fruit is native to South America, and the fruits of this type have a purple color.

Cherry products and methods of use

* Cherries and their products can be added to many foods to obtain their benefits, and among the common forms of cherries that can be used are the following:

* Dried cherries: It can be eaten with dark chocolate, coconut, or almonds, or put it with baked goods to give it a sweet, natural taste.

Ethnology | Archeology | What is cultural anthropology ?